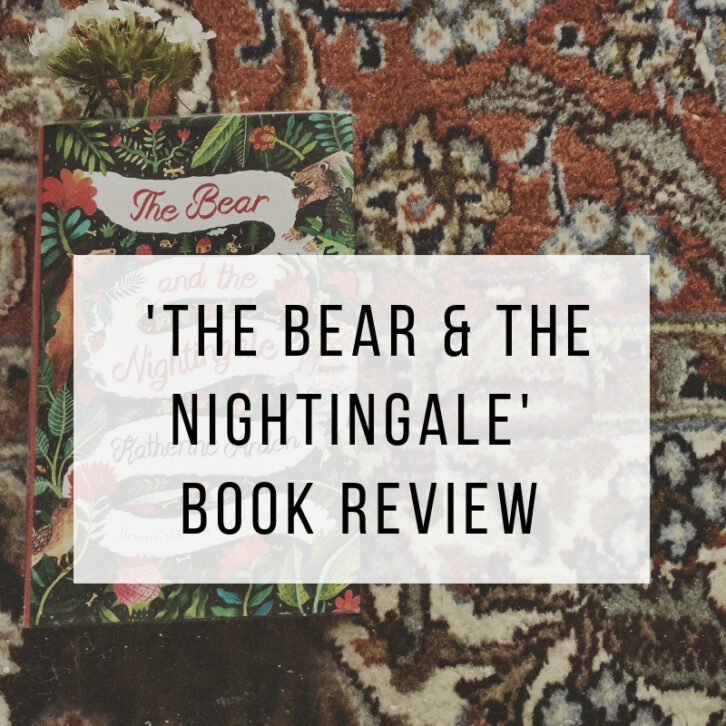 After seeing this book fly around the bookstagram community, it certainly tempted me. And it was just my luck to find the hardcover staring straight at me, at my local library. As, after realising my bank balance can’t sustain my appetite for books I have decidedly gone and started taking out books and ordering them in (alongside buying). I highly suggest this for any budding book reviewer as it really does help and it is certainly rewarding when you find beautiful hardcovers such as this.

At the edge of the Russian wilderness, winter lasts most of the year and the snowdrifts grow taller than houses. But Vasilisa doesn’t mind—she spends the winter nights huddled around the embers of a fire with her beloved siblings, listening to her nurse’s fairy tales. Above all, she loves the chilling story of Frost, the blue-eyed winter demon, who appears in the frigid night to claim unwary souls. Wise Russians fear him, her nurse says, and honor the spirits of house and yard and forest that protect their homes from evil.

After Vasilisa’s mother dies, her father goes to Moscow and brings home a new wife. Fiercely devout, city-bred, Vasilisa’s new stepmother forbids her family from honoring the household spirits. The family acquiesces, but Vasilisa is frightened, sensing that more hinges upon their rituals than anyone knows.

And indeed, crops begin to fail, evil creatures of the forest creep nearer, and misfortune stalks the village. All the while, Vasilisa’s stepmother grows ever harsher in her determination to groom her rebellious stepdaughter for either marriage or confinement in a convent.

As danger circles, Vasilisa must defy even the people she loves and call on dangerous gifts she has long concealed—this, in order to protect her family from a threat that seems to have stepped from her nurse’s most frightening tales.- [blurb from Goodreads]

The first thing that drew me to this book was that it was promising Russian fairytales and I am a huge fan of these, alongside Russian fables. The fact that this was also Katherine Arden’s debut novel had be fawning over the blurb and the beautiful cover. You can really tell her imagination has been enchanted by these classic tales also. The novel is really well written for an adult fairytale and has some excellent characters. Obviously the wild and untamed Vasya was my favourite.

Another thing that really pleasantly surprised me was the fact that Arden has really encompassed religion into this novel. A theme which I didn’t think would be as prominent as it was. This really gives way to an intriguing plot and I loved the way in which certain character reacted (or didn’t!) to this theme. Another point I really loved was the massive emphasis on family, especially the brothers and sisters of Vasya. There is a huge sense of the strong bond between family and this is really shown at certain points of the novel.

The only thing I didn’t particularly like was the treatment of women and the perspective of them by certain characters. I get Arden is trying to stick to the time period but I felt certain things were exaggerated when they didn’t have to be especially the fact that women are only meant to bear children. Maybe this is because I’m so strongly against this view that it got under my skin? Who knows. Afterall, it is set in Medieval Russia.

To conclude, this novel is really something else and I will be delighted to read more about Vasya in the sequel. I thank bookstagram once again for showing me beautiful novels.And, I was honestly devastated when I came to the end of the beautiful realised world that Arden had created.

SIDE NOTE: I do realise some people do skip the author’s note (something I see as sacrilege) but the end note was really lovely by Arden. It explained that she mixed the Russian words with English in an attempt to transliterate aiming to retain Russian roots and for English readers to be able to pronounce. I have to say a strong point of the novel was how enchanting all the names of the characters to even objects were so really interested in this point.